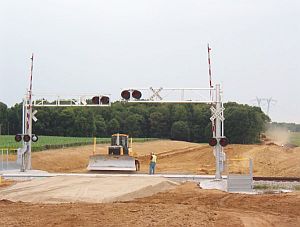 Ron Wireman, Construction Engineer from DLZ for the Pioneer Drive Extension and Improvement Project updated the county commissioner on the progress of the work.

The dirt moving work continues on the new Pioneer Drive project and while the work is still officially “on schedule”, according to Wireman, utility work could soon cause a setback.

Wireman’s report states that relocation of utilities in the area were moving more slowly than anticipated and that contractors on the project G.E. Marshall and Rieth-Riley had mentioned to him that soon that utility relocation would be delaying the project. 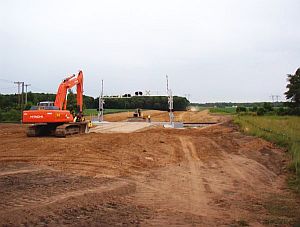 The closing of S.R. 17 has been delayed due to the relocation of electric, gas and phone lines, and rain. The delays in closing the road have resulted in corresponding delays in the closure of Lincoln Highway. Both roads are not allowed to be closed at the same time during the project so it appears that a scheduled 60 day closure of Lincoln Highway may not happen until after Labor Day at the earliest and possibly not until early next year.