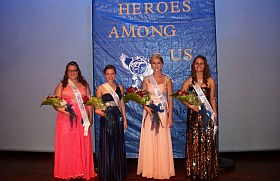 Marshall County vied for the title.

The contestants each had a personal interview with the judges, earlier in the day and  in front of a packed crowd at Argos High School,  the ladies modeled their “Theme Wear” they each created to reflect the festival theme, “Heroes Among Us” by choosing their “Favorite Hero”.

“Formal Wear” and an on-stage question helped the judges narrow the contestants down to the top five.  The top five were MaKayla Fox, Mayce Lewandowski, Maelee Holderread, Cassandra Quissell and Sarah Hawkins.

After each one of the top five finalists each answered the same on-stage question, the scores were in.   2015 Miss Blueberry, Cassandra Quissell was crowned.  1st Runner-Up was Maelee Holderread, 2nd Runner-Up was Sarah Hawkins and 2015 Miss Friendship was Emilie Rospopo.

The Queen and her court will be busy making appearances for the Marshall County Blueberry Festival starting tonight at the Bremen  Firemen’s Festival Parade and continuing though the festival by appearing in Labor Day Parade. 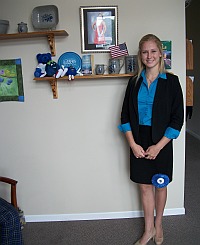