On July 13, 2009 the Plymouth Building Commissioner approved the building permit for Comfort Suites at 2513 North Michigan Street.  Citizens have been questioning since February or March as to the reason why no action has been happening at the hotel.

Property owners, J.P. Plymouth LLC in Mishawaka said in a phone interview, “We are committed to completing the project.”  Cameron Missa  explained that the economic conditions have caused them to pull back on the work.  He said, “The delay is only temporary.”   The exterior is completed but the interior has much work to do.” 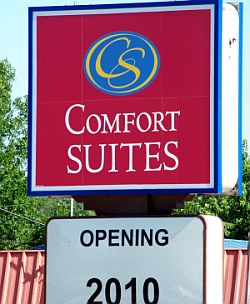 The original building permit stated that the hotel was to be completed in February 2010.  Missa said that if the building wasn’t completed in September or October that he would not push to have workers finish the building until the spring of 2011.  His reasoning is, hotels lose business in December, January, February and March.