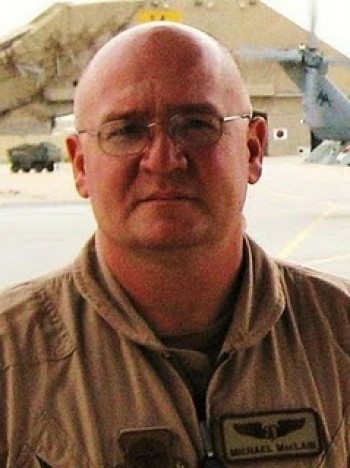 Recipient of the award is Michael E. MacLain, Class of 1980.

Michael E. MacLain is an officer in the United States Air Force Nurse Corps. He has been married to his wife Michelle since May of 1990. They have two sons: Eric, born in 1993 and Sean, born in 1995. Michael credits his success to his days at Plymouth High School and the benefit of great leaders he had as a student and as an athlete, strengthened by the love and support from his family and friends for which he is eternally grateful.

Michael was born in Plymouth, Indiana on March 11, 1962 to Hughie and Rose MacLain and was the last of six children to graduate from Plymouth. During his time at P.H.S., he was a member of the 1977 AA State Championship Football Team and was a three sport varsity letter winner in football, wrestling and baseball, receiving First Team All-Conference honors in football and baseball. Michael graduated from Plymouth High School in 1980. He went on to play NCAA Division II football at Franklin College of Indiana and was an integral part in two Heartland Collegiate Conference Championships. He continued his football career at Manchester College where he garnered Most Valuable Player Honors and was named to the NAIA Division II All-American Football Team as a defensive back.

His military career began in January of 1988 when he enlisted in the United States Air Force as a Nurse Corps Medical Technician. He was assigned to Air University Regional Hospital at Maxwell Air Force Base in Montgomery, Alabama and remained stationed there until July 1993.
Returning with his family to Tennessee, Michael enrolled in Lincoln Memorial University’s School of Nursing and graduated in 1996. He worked as an Emergency/Trauma Nurse at East Tennessee Children’s Hospital, Methodist Medical Center of Oak Ridge Tennessee, and The University of Tennessee’s Medical Center at Knoxville.

One day in September, Michael was working the night shift at the University of Tennessee’s Medical Center when an Air Force recruiter brought in his asthmatic daughter to be seen. Recognizing the “recruiting cookie” from his enlisted days, Michael inquired about Air Force nursing needs, thus setting the wheels in motion for returning to active duty and serving his country in a time of great need.

In November 2001, Michael was commissioned as a Captain in the United States Air Force Nurse Corps. After completing Commissioned Officer Training in January 2002, he was assigned to the Emergency Department at Wright Patterson Air Force Base in Dayton, Ohio. He completed a Critical Care Air Transport Team course in 2003 and was deployed in support of Operation Iraqi Freedom and Operation Enduring Freedom as a member of a three person critical care team in 2004 and 2005. In 2005, he completed the Aeromedical Evacuation Flight Nurse course and was reassigned to the 43rd Aeromedical Evacuation Squadron at Pope Air Force Base in Fayetteville, North Carolina. He was again called to action in support of Operation Iraqi Freedom, Operation Enduring Freedom and the Horn of Africa as the leader of an Aeromedical Evacuation Team in 2006, 2007 and 2008. Michael has logged over 1100 hours, has been involved in over 250 sorties, and has provided outstanding medical care to over one thousand seriously injured or ill military members. In January of 2009, he was appointed as the Flight Commander of Air Crew Training for ninety assigned aircrew members. He was then promoted to the Field Grade Officer Rank of Major in August of 2009.