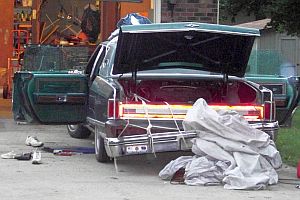 A medical call Tuesday evening on Lemler Lane resulted I the arrest of a Plymouth man and the Indiana State Police Clandestine Team being called.

City officers and the ambulance service responded to the Lemler Lane address and found 20 year old James Bailey working on a sound system in a vehicle parked in the driveway.  Officer John Weir said Bailey was “tweaking” badly.

Tweaking is the most dangerous stage of methamphetamine abuse occurs when an abuser has not slept in 3-15 days and is irritable and paranoid. The tweaker craves more methamphetamine, causing frustration and unstable behavior in the user. Because of the tweaker’s unpredictability they can react violently. A tweaker can appear normal – eyes clear, speech concise, and movements brisk; however, a closer look will reveal that the person’s eyes are moving ten times faster than normal, the voice has a slight quiver, and movements are quick and jerky.

Officer Weir said Bailey had beer in the vehicle and that gave officers probable cause to search the vehicle.   During the search officers located a one pot meth lab in the vehicle.  It appeared that the lab had cooked the night before and burned through the bottle and leaked into the vehicle.

James Bailey was transported to the Marshall County Jail and booked in on a meth charge.

The ISP Clandestine Team was called to the scene to properly dispose of the lab.