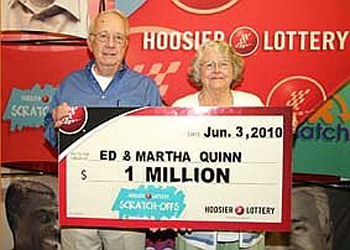 06/04/10 A Marshall County couple were subdued as they claimed a $1 million prize at Hoosier Lottery Headquarters in Indianapolis today.  Ed and Martha Quinn of Bremen were amazingly cool and quiet as they redeemed their winning Hot Millions ticket.

Ed Quinn bought the lucky ticket at Speedway at 1228 W. Plymouth Street in Bremen. Initially, Quinn thought he had won $10. As the zeroes in his $1,000,000 prize revealed themselves, he realized he was looking at more than just pocket change.

Quinn is retired from the real estate business.  The couple have four grown daughters and nine grandchildren. They plan to use the money to help their grandchildren. Beyond that, they said they simply plan to enjoy a steak dinner.

The Hoosier Lottery reminds all players to please play responsibly.