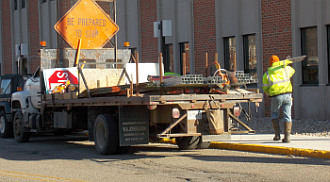 An unfunded federal mandate requires towns, cities, counties, and state governments to improve the reflectivity of street signage.
As a way to comply with the new requirements the City of Plymouth joined with other local governmental agencies in Marshall and Saint Joseph counties on a project in July that MACOG spearheaded to meet the federal standards. MACOG established a sign inventory program which includes a sign condition assessment relating to the sign’s reflectivity requirements, new post standards and inventory of signage. 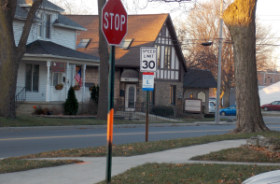 Saint Joseph County received a Highway Safety Improvement Program Federal Grant for regional sign replacement which is has a 90/10 local split. Michiana Contracting from Plymouth was awarded the bid for the project which includes the replacement of 4,340 signs in the two counties. Total cost for the project was estimated to be just over $795,000. 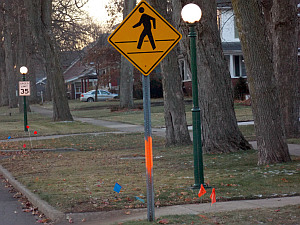 In the City of Plymouth a total of 146 signs and a number of posts needed to be changed out. Michigan Contracting started that project last week in town. Many of the city sign posts had a large orange streak of paint on them, identifying them as being non-compliant. Workers have been replacing signs and poles at an estimated cost to the city of $2,893.00. 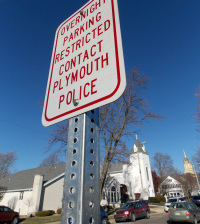 Marshall County has 453 signs and poles to be replaced at an estimated cost of $8,976.00. Other jurisdictions in Marshall County participating in the MACOG program include Argos who needs to replace 105 signs, Bourbon who only needs 16 new signs, Bremen with 208 signs, Culver with 37 and LaPaz with 8.