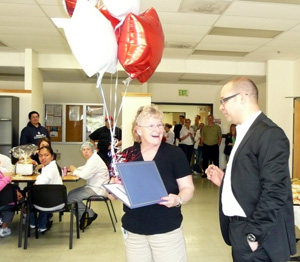 Employees at Zentis Food Solutions, NA LLC were treated to lunch and prizes for participating in this year’s 2010 United Way of Marshall County Campaign.  As an incentive, donors could select three jars of jelly for each $10 gift. Employees who gave $50.00 or more to the United Way campaign received a gift basket and a chance to win two round trip airplane tickets anywhere in the United States.   Norbert Weichele, CEO, thanked those gathered and drew Linda Briggs’ name as the winner of the airplane tickets. The successful campaign that almost doubled last year’s effort was run by Carmen Yoder, Executive Assistant to Weichele.

Jayne Gibson, assistant director of United Way, thanked those gathered for their generosity and community support.

Zentis is also donating jams and jellies to be sold for additional fundraising for United Way throughout the year.