Argos Teen Arrested for Leaving the Scene of Accident 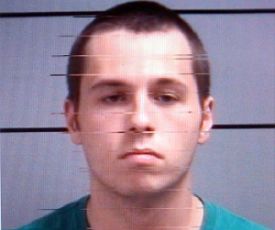 06/21/12  On Saturday, June 16th at approximately 2:56pm, the Marshall County Sheriff’s Department received a call in reference to an auto accident at US 31 and US 30. Marshall County Police also obtained information that one of the vehicles involved, a Chevy Impala with extensive front end damage, left the scene and was traveling eastbound on US 30. Officer Les McFarland had been responding to another reported accidents and observed the vehicle turning south onto King Road so he initiated the traffic stop on the vehicle in the area of Marshall County Highway Department.

The fleeing driver was identified as Jordan S. Boulas 18, of Argos. Boulas was taken into custody and transported to the scene of the accident on US 31. Officer McFarland spoke with the driver of the other vehicle also involved in the accident, she explained that she was traveling southbound on US 31 and Boulas vehicle ran into the back of her vehicle.

Boulas was then transported to the Marshall County Jail where he was booked in for leaving the scene of a property damage accident, a class A misdemeanor. He was given a $500.00 cash bond and was released when his bond was paid on June 17that 1:15am. Boulas is scheduled to appear in Marshall County Superior Court II on June 26th at 8:30am.