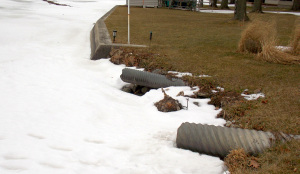 An erosion issue on Addison Street at Lake of the Woods was brought to the attention of the Marshall County Commissioners during their meeting this week.

Peter Peuquet, an adjacent property owner told the commissioners that a drainage culvert that feeds into the lake has severe erosion issues and that is causing erosion on his seawall.  He said he keeps filling it in but fears that if it continues it could have devastating effects on his seawall.  He estimated 8 feet of erosion in the last couple of years. 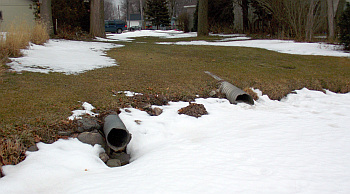 The County Highway Department looked at the erosion problem in June and determined they did not have funds to address the problem.

Peuquet told the commissioners he has submitted an application to the DNR for a rock-wall to maintain the erosion control. He’s also willing to pay for the project.  During the meeting he said he’s been maintain the property for years and feels paying for it now will be less than paying for it if the repairs are not completed. 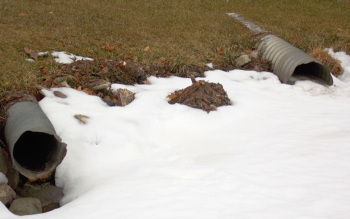 Another concern is a few large cottonwood trees that are dead and need to be removed. Peuquet is willing to share in the cost of removal.

Commissioner Kurt Garner questioned where the drainage culvert was coming from. Peuquet said it drains the properties up the street.

Commissioner Kevin Overmyer asked about usage of the property and Peuquet said, “To be honest, since the pier and boat issue very few use the access.  There are kids from the neighborhood will come down and swim but that’s about it.”

Any action on the erosion issue was tabled until the next commissioner’s meeting on February 2nd so the commissioners will have an opportunity to visit the site and for any neighbors or concerned citizens to voice their thoughts to the commissioners prior to their next meeting.