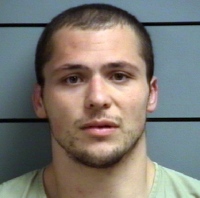 05/08/13  On Sunday, May 6th at approximately  2:25 P.M. Plymouth Police Officer John Weir responded to Wal-Mart after a report that a subject had shoplifted and fled out of the store from the Loss Prevention Team.

Officers with the Plymouth Police Department and Marshall County Sheriff’s Department searched the area of the wetland directly west of Wal-Mart.  The city’s K-9 Jax was deployed and a short time later located 24 year old, Justin Duerloo of Plymouth lying in the water and high cattails.

Duerloo was taken into custody and transported to the Marshall County Jail for theft, resisting law enforcement and trespassing and booked on a $3,005 bond.