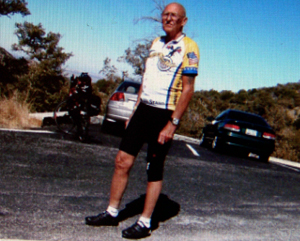 04/26/11 The 74 year old Plymouth man that started walking across American for the American Heart Association is back at it but this time he is riding. On Monday morning John Wraight was in Collinwood, Tennessee having already covered 100 miles in 3 days.

Wraight began his journey last spring and managed to walk 500 miles east to west across Delaware and Maryland and then up the C & O Canal Towpath to Cumberland, MD.  He discovered that his shoulders could not support the weight in his back pack and returned home for a much needed rest. 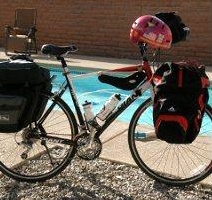 He decided to opt for a new mode of transportation and purchased a bike that would allow him to carry the necessary supplies on the bike instead of his shoulders.  Last fall he biked 685 miles leaving Joliet, IL on September 11th and arrived in Clinton, MO on Oct 1st.  Wraight said, “It was an awesome journey.  I went alone, it was arduous, it taxed me physically and mentally, but I kept the goal in sight and with the support of the people I met along the way ended up where I had planned, at the end of the Katy Trail in Missouri.

He came home for a week and then decided to walk half-way across southern Indiana.

After having shoulder surgery last December, John started out last week on the next phase of his adventure riding the Natchez Trace from just south of Nashville to Natchez, Mississippi.  The Natchez Trace is a National Park for 444 miles, without buildings, other than national park buildings, no commercial traffic, 50 mph speed limit and designated a bike friendly road. Wraight said, “There is much to see and do along the way.  I have driven it and the scenery is beautiful.”  He hopes to cross the Mississippi and ride down to near Baton Rouge and then come back the same way.

The Plymouth resident is raising awareness that exercise is good for you, especially your heart. He said, “I did not start in earnest until I was 68, and my health situation improved dramatically.”

Alone on this mission, Wraight says he finds friendly folks at every turn of the trail.  His estimation is that this trip will take about 5 weeks.   He said, “My health is good, I have some shoulder and arm pain left over from my surgery in December along with some pain in the left knee and some other aches and pains, but all in all I am OK.”

John closed by saying, “This summer I will more than likely be working on my son’s old 1895 home trying to restore it to its former beauty.  Along with some short bike trips, and maybe some running.  I would love to do a half marathon, but maybe that is just a pipe dream.  In the early fall, I will attempt another long trip, I think.

Follow John’s adventure on his blog site: johnwraight-walkingfortheaha.blogspot.com.   He is still hoping to obtain donations for the American Heart Association with this endeavor. He also hopes to write a book when his travels are done maybe titled “The wind is always in your face” or “The road is never flat” something like that as these two things are true when biking.