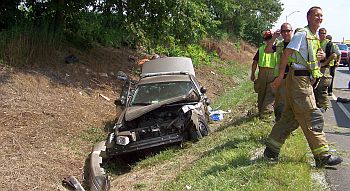 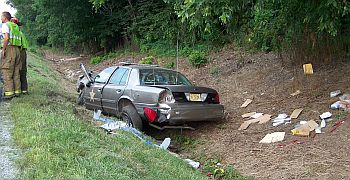 According to the police report, the officer, Jeff Snyder was responding to an industrial accident on the north side of Plymouth with lights and siren on. A vehicle driven by Nancy S. Eldrege of Janesville, Wisconsin drifted into the outside riving lane causing Officer Snyder to drive into the median to avoid a collision. Upon correcting Deputy Snyder lost control of his squad car and ran off the roadway on the north side of the road going down a steep embankment. 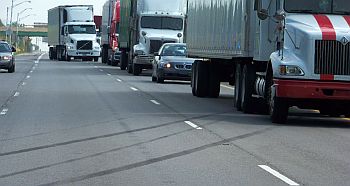 The officer was transported to Saint Joseph Regional Medical Center with injuries to his right arm.  He is expected to be fine in a couple of days.

The Eldrege vehicle was not damaged but he Marshall County Sheriff’s vehicle was totaled in the crash.

Indiana State Police are investigating this accident.  County officers were assisted at the scene by Plymouth Police, Plymouth Fire and EMS.