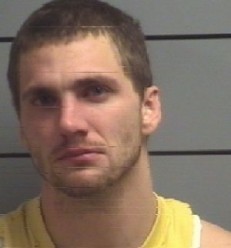 04/24/13 James W. Bailey, 23, of Plymouth was sentenced on April 17 in Marshall Superior Court I to 10 years imprisonment for manufacturing methamphetamine.  In open court, Bailey admitted that on December 8, 2012 he manufactured methamphetamine at an apartment on Lincoln Way East in Plymouth, with other individuals.

A Pro-tem Judge approved the plea agreement reached between Chief Deputy Prosecuting Attorney E. Nelson Chipman, Jr. and defense attorney Tom Black, which provided for a sentence at the Indiana Department of Corrections of 10 years.  No part of the sentence was suspended.

The case started when citizens called Plymouth Police after observing a male and female dump a smoldering box into a dumpster near the area of Kingston Drive.  Officer Shelley Cleveland responded and talked with the citizens and examined the discarded box.  The Indiana State Police Meth Lab Team was then called to examine the contents, assist with the investigation and clean up the hazardous materials.

The citizens gave a description of the male and female and the direction of their travel.  Officer Cleveland soon observed people with the same description in the area and made contact and eventually an arrest.

Chief Deputy Prosecuting Attorney Nelson Chipman stated, “This is an excellent example of how far we can go together with public safety when citizens, as here, stay alert to the activities in their neighborhood and when suspicions arise, give the police a call.  Here the citizens had a good idea that the smoldering trash was methamphetamine related.  Instead of not getting involved, they did the right thing for the protection of their neighborhood, their family and all of us.”

Also assisting Officer Shelley Cleveland in the investigation, arrest and prosecution of the case was Sgt. Gary Cleveland and Officer Steve DeLee of the Plymouth Police, Trooper J. Wilson of the Indiana State Police, and the Marshall County Prosecutor’s Office.