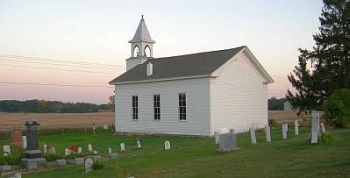 06/14/11 June 12 marked the 150th anniversary of the Jacoby Church and many local residents were on hand to commemorate the occasion. The original dedication took place on June 9, 1861.

In 2006, the Wythougan Valley Preservation Council worked with Township Trustee Doug Kucera to restore the structure. It was not until 2008, that the restoration work was completed. Donations of some $40,000 in monetary amounts and in-kind volunteer services made the project possible. The building was placed on the National Register of Historic Places in 2006.

During the rededication, Kurt West Garner, president of the Wythougan Valley Preservation Council, welcomed the guests and gave a brief history of the project. 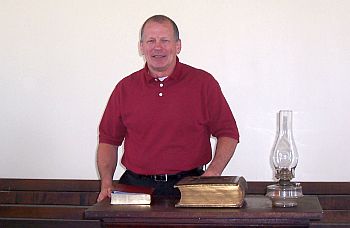 The rededication message was given by Bob Read, who grew up in the church. Read shared his memories of ringing the bell by hanging on to a heavy rope that even lifted him into the air if he pulled hard enough. He said, “I remember sitting as close as possible to the stove on the really cold Sunday mornings.”

Read said, “I believe this building has been set aside for sacred use. It has impacted many lives and the legacy lives on.”

Read’s parents, Barb and James Read, were among those attending the 150th anniversary. Barb read said, “Today we sat on the same seat that we occupied with our five children when we came to church here. “ She added, “It was near the stove to help keep them warm, but we also had to watch to keep them from getting too close and getting burned.”

The Reads were two of the 44 people who reopened the church on June 29, 1958 after the building had been closed for many years. As the congregation grew the need to more space lead to the construction of the Sunrise Chapel in 1964 on Lincoln Highway.

Special music was offered on Sunday by the Maxinkuckee Singers under the direction of Beth Webster.