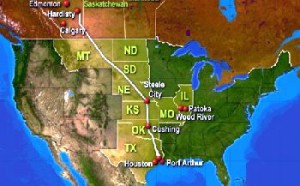 Donnelly has continually supported the Keystone XL pipeline by introducing bipartisan legislation to prevent lengthy delays on the project  and pushing for his Opportunity Agenda  that would support investments in American infrastructure that promote energy security and an all-in approach to energy production, like Keystone XL pipeline.

Donnelly said, “At a time when our country is making important investments in our energy economy, the President’s decision to reject the Keystone Pipeline is disappointing. A strong energy economy is critical to our country’s economic success and our national security, and I will continue to support safe, common sense investments that strengthen our economy.”

Representative Jackie Walorski said, “I’m disappointed the president turned his back on legislation that had overwhelming support from both the House and the Senate to put more Americans back to work and move our country towards energy independence. This is a missed opportunity to create thousands of jobs for American workers and strengthen our local economies.”

Donnelly, who helped the Senate pass legislation approving the Keystone XL pipeline earlier this year, believes in an all-in approach toward American energy production as part of his Opportunity Agenda. Donnelly thinks that we should be investing our money in energy infrastructure projects here rather than spending hundreds of billions of dollars to purchase energy from overseas. In order to invest in domestic energy infrastructure projects, there must be an efficient approval process in place.