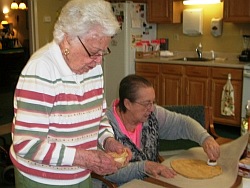 Residents of Miller’s Assisted Living Community are gearing up for their annual Pennies for Paws campaign.  The Pennies for Paws campaign begins in February when residents and staff begin collecting their loose change to donate to the Marshall County Humane Society.  The change adds up to dollars and the Humane Society uses the donation to purchase much needed dog and cat food, paper towels, stamps, pet treats and other items.  Last year the Miller’s Campus decided to boost the donation even more by making and selling pet treats.

The assisted living and the nursing facility activity departments get everyone involved in the baking, packaging and selling of the pet treats.  They use a basic recipe found on-line with the main ingredient of peanut butter that pets love so well.   Residents began baking the treats this week.  For the next two to three weeks they will be using all their spare time making treats and selling them at the two facilities.

Then on Wednesday, February 11th they will set up table at the annual Marshall County Humane Society Baked Potato and Salad Bar at Webster Center where the treats will also be on sale.  The treats appeal to dogs and cats.  They will be individually bagged and sell for $1.00 per bag.  If you are interested in purchasing the homemade pet treats or if you would like to donate to Pennies For Paws you may do so by calling 574-936-9801 and asking for Cindy Flagg.  Miller’s Assisted Living is located at 625 Oakhill Avenue in Plymouth.