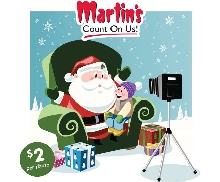 The Martins Grocery Store in Plymouth will be hosting a special event this Saturday and Sunday, December 12th and 13th.  It’s called “Snapshots with Santa” and will be a fundraiser for a local organization.

From 11 a.m. to 3 p.m. Saturday and Sunday, customers can get their photos taken with Santa for just a $2 donation. The Martins store on East Jefferson Street in Plymouth has chosen Heminger House to be their charity this year.   All proceeds from the two day event will benefit Heminger House!

Please consider stopping by our Plymouth Martin’s store this Saturday and Sunday and have your picture taken with Santa. It will be helping those who come to the Heminger House seeking safety and the ability to flee an abusive situation.  The house provides a warm place to live while empowering these women to work on themselves and move on to independent and productive choices in the future.

But that’s not all, the week following the Snapshots with Santa, December 14th through the 20th, Martin’s will have a voting contest on their Facebook page where customers can vote for their favorite Martin’s Santa and area charity. The store with the most votes will receive an additional $500 donation in their name for their chosen charity along with a pizza party for their store’s staff.

Starting December 14, log on to Santa Showdown and vote for the Santa from the Plymouth Martin’s Store.