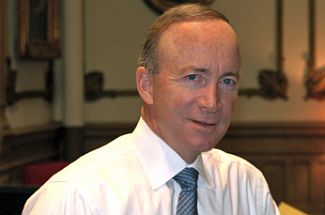 02/03/12  Indiana Governor Mitch Daniels shared his thoughts on ongoing federal mandates and how they affect the average citizen. Daniels was speaking at an Editorial Meeting on January 27 in front of area reporters.

Although he didn’t directly respond to the topic of new federal mandates from the Department of Health and Human Services that will force even religion–based organizations and not-for-profits to pay for contraceptives within insurance policies, Daniels did speak on the role of the federal government in such matters.

He said, “Some of these folks believe they have a right to “A” tell everybody how to live and “B”, it’s for our own good.”

He said, “To be charitable, he (President Obama) came into a tough situation, but again there are some facts that he made it worse, not better.”

Referring to a chapter in a book that he has written, Daniels said, “I have a chapter in there called “Shrunken Citizen”. He said almost without our noticing it, the zone of what we’re allowed to do as individuals, collections of individuals, businesses, churches, and schools keeps getting shrunk.”