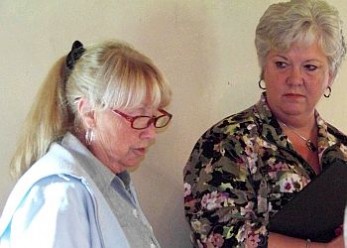 09/07/11 Tuesday evening members of the Plymouth Park Board heard the request of Judy Delp to look into the termination of Gina Young, the City’s Park Recreation Director.  Young was fired on August 8th.  She said, “I address this board as an interested citizen who is concerned for fairness.”  She admitted to being a “casual” park participant and said, “I have seen and heard of increased activities and excitement in the park since Gina Young took on the role of recreation director.”

She then asked a couple of citizens to speak on the issues.  Kay Wagoner said, “Gina has the energy and ability to get tasks completed.”  She explained that Young had been a guest speaker at a sorority meeting and have encouraged her to volunteer for a Halloween event.  Wagoner closed by saying, “She is the most competent and qualified for the job.”

Another speaker, Christie Howe said that her son was a counselor and her granddaughter took swimming lessons at the pool.  She said that her family has enjoyed event such as Easter breakfast, Fun Day in the Park, and the Christmas celebrations.  Howe said, “I was shocked and surprised at the firing.”  She said the news reports “left me wanting to know more.”  She closed by saying, “You can’t deny the passion she brought.”

Mrs. Delp said she and her husband, Mike decided to meet with Gina and James Young to discuss the situation.  At that time Gina allowed Mrs. Delp to look at her personnel file.  Delp diligently matched up the 17 points of termination provided to WTCA with information in the personnel file. She also talked with Gina and asked questions on the various violations.  Delp presented Park Board members with a document she created the explained the 17 points.

The report indicates that 4 of the violations involved teenager life guards not clocking out properly while 5 violations involved teenage guards trading hours without permission.  Young told Delp that 2 problems with the timecards that were changed to show the corrected hours were done with superior’s instructions.  The 4 problems for the pool office being out of cash register ink were on a weekend when Mrs. Young had the day off, Friday prior because of her birthday and the park superintendent was in charge.  Another issue was Mrs. Young not turning in her time card on time.  Young found her timecard on desk and called the office manager who told her to deliver it personally to the city office.  It was noted that Young is a salaried employee and not paid hourly.  The final issue noted as improper delivery of park department funds.  Young used a white envelope to deliver funds to the city office rather than a bank bag.

Delp said, “I think there are violations, but how serious are they? I encourage you (park board) to examine the document and talk with Young to find out the full details.”

Jim Causey, Park Board President said, “The situation is closed at this point. It’s unfortunate, yes.  I hoped that she would continue on but there were federal law violations. The city could have been in serious trouble.”

City Attorney Nelson Chipman explained that Indiana laws violated could have cost the city $1,900 in fines. The federal violations could have been as high as $77,000 at the max and if there were willful violations criminal charges and $10,00 for the first violations and fines and 6 months in prison for a second violation.

Causey said they will review the documentation and the administrative committee would look at it with the counsel of the Mayor and city attorney.