Blueberry Board Gets Fire Extinguisher Training 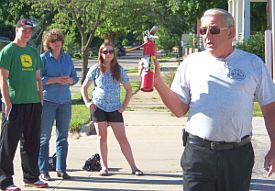 Smith said the best extinguisher for home use is an ABC extinguisher that will work on wood, paper, plastics, liquids, and electrical.  He said, “It’s a good universal extinguisher to have.” 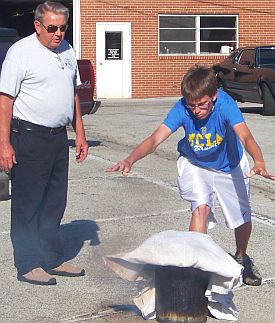 Smith then conducted technical training that included hands on use of an extinguisher by several members of the Blueberry Board.  The fireman told his trainees to remember the work PASS.

P – pull the ring that locks the handle

A – aim at the base of the fire

S – squeeze the handle and

S – sweep the fire away from you

He also encouraged members not to breathe any air from the fire due to the toxic odors.

It was noted during the training that during the parade last year there was a fire in a pizza oven at the festival.  A fire extinguisher was used by the owner and no damage was done.

It was also noted that all booths are checked during the weekend to make sure vendors have an extinguisher ready to use. 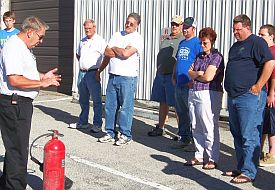 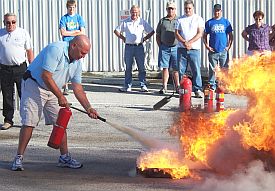