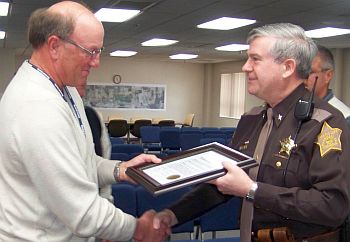 12/22/10 Marshall County Sheriff on VanVactor was honored by the Commissioners during their meeting Monday.

The Commissioners passed a resolution in recognition of outstanding accomplishment and contributions.  The resolution continued by saying:

Whereas, Jon VanVactor has been a Deputy Sheriff and Sheriff of Marshall County from November 1, 1978 until December 31, 2010 serving Marshall County citizens for over 32 years; and

Whereas, Jon Van Vactor has distinguished himself as a law enforcement officer for the County creating a more secure and safe place to live; and

Whereas, Jon Van Vactor was instrumental in the design, construction, and initial operation of the County Correctional Facility.

Now, Therefore, Be It Resolved by the Marshall County Commissioners, that Jon Van Vactor be hereby honored by Marshall County for his thirty-two years of outstanding service to the County.  By this resolution, the Commissioners and County recognize and acknowledge his dedication and commitment and the County pays tribute and extends its sincerest gratitude to him for his service in the performance of his duties and responsibilities to the citizens of Marshall County.

When asked to reflect on his 32 years of service he said, “I remember that first night in 1978 when I was finally ‘turned loose’ by myself.   I was the lone deputy on duty in all of Marshall County that night.” he said. “It was a pretty awesome night to be responsible for the entire county that is 20 square miles.”

He talked about changes in the jail with the number of inmates.  Van Vactor said, “I remember we had 10 or 12 inmates in the old jail,” he said. “We have 101 inmates today.”

Jon took time to also comment on the employees who keep the jail and Sheriff’s Department running smoothly.  He said, “That’s how we get by with the least amount possible.” He also said, “I truly believe that this is one of the best counties in the state.  I think that really speaks for itself. The reason it’s that way is because we have officials who work together to get things done. The taxpayers should appreciate that.” 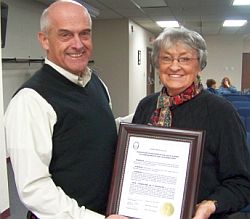 The Commissioners also passed a resolution honoring Betty Engle for her 8 years serving as County Recorder. 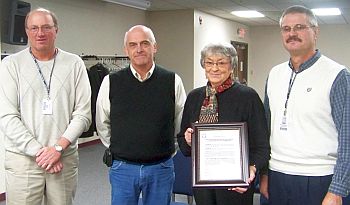