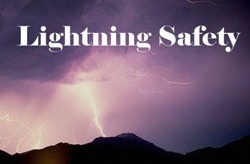 The National Weather Service advises citizens of threatening and severe weather in our area. Severe thunderstorms are always a possibility in Northern Indiana and with severe weather comes one of the nation’s deadliest weather phenomena, lightning. The Marshall County Emergency Management Agency would like to keep you and others safe by being lightning aware.

A typical lightning flash is about 300 million Volts and about 30,000 Amps, and is always produced by a thunderstorm. The most common myths about lightning strikes and safety are that if it’s not raining and the sky is free from clouds, you’re safe from lightning. If there’s lightning, lay down flat on the ground. If you’re caught outside, assume the lightning squat. Don’t touch someone who’s been struck by lightning or you’ll get shocked and, to just go ahead with your plans during a lightning storm. All of which are false statements and cause more harm than good.

To stay out of harm’s way, know your facts. Lightning often strikes the same place repeatedly, especially if it’s tall, pointy, isolated objects, which are the factors that control where a lightning bolt will strike. Most cars are safe from lightning, but it is the metal roof and metal sides that protect you, NOT the rubber tires. A house is a safe place to be during a thunderstorm as long as you avoid anything that conducts electricity. The presence of metal makes absolutely no difference on where lightning strikes.

It is not possible to have thunder without lightning, thunder is the direct result of lightning. Nonetheless, it is possible to see lightning and not hear thunder because it was too far away. Heat lightning is an example and occurs most often in the summer.

Most importantly, do not take chances with lightning. The odds of being struck may be very slim, but it’s better not to be that one.

For more information on emergency or disaster preparedness, contact the Marshall County Emergency Management Agency at (574) 936-3740.