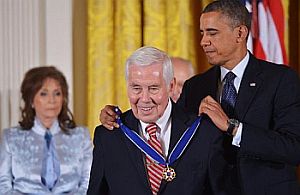 Lugar, Obama said, “stands as a model of what public service ought to be.”

Lugar was one of 16 Americans given the Presidential Medal of Freedom, an honor for those who have made significant contributions to national security, world peace or cultural developments.

The last, and perhaps only other Hoosier, who has received the honor is C-SPAN founder Brian Lamb.

Before the president draped the medal — a white star on a red circle hung on a blue ribbon — around Lugar’s neck, a military official proclaimed that Lugar “put country above party and self to forge bipartisan consensus.”

The president highlighted Lugar’s decades-long commitment to reducing the threat of nuclear weapons through the Nunn-Lugar Cooperative Threat Reduction Program to secure or destroy weapons of mass destruction in the former Soviet Union.

Lugar, who has received numerous honors since he lost his bid for re-election last year, said after the ceremony that the Medal of Freedom was particularly special.

“It really commemorated the work that we have done to try to eliminate the threat to our country from weapons of mass destruction,” he said.

Obama thanked Lugar for teaching him about the issue when they both served in the Senate, including bringing him along on one of Lugar’s many trips to the former Soviet Union to oversee the program.

“I should say traveling with Dick, you get close to unexploded land mines, mortar shells, test tubes filled with anthrax and the plague,” Obama said. “His legacy, though, is the thousands of missiles and bombs and submarines and warheads that no longer threaten us because of his extraordinary work. Our nation and our world are safer because of this statesman.”

The Medal of Freedom was created by President John F. Kennedy 50 years ago. It is the highest honor the U.S. bestows on civilians.

Other people receiving the medal

Ernie Banks, a member of the Baseball Hall of Fame.

Patricia Wald, first woman appointed to the U.S. Court of Appeals for the District of Columbia.