Fundraiser for Patriot Guard this Saturday 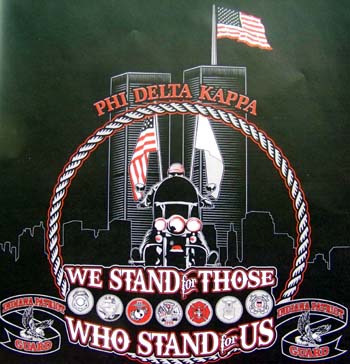 A Plymouth group will take the opportunity of the 9/11 anniversary to celebrate their first “Patriot Day.”

The Plymouth Phi Delts are inviting the community to come and honor patriots who have given their lives for their country with an evening of activities that will begin with a ride and ceremony at Oak Hill Cemetery in Plymouth.

“It came about as a way to help out a group called the ‘Patriot Guard,’” said Steve Keiser, the event’s organizer. “They are an organization that I believe is based in Kansas with members here in Indiana. Their mission is to honor fallen soldiers, aid their families and support the families of current soldiers deployed overseas. They send care packages to soldiers and they’ve sent over 10,000 pounds of food overseas.”

Members of the Patriot Guard will be in Plymouth for the procession from the Phi Delt Hall to Oak Hill Cemetery that begins at 4 p.m. The procession will have a police and fire escort.

Plymouth residents are encouraged to line the streets downtown to show support for the fallen.
The procession and ceremony at Oak Hill is in honor of Plymouth soldier Justin DeCrow, tragically killed about a year ago and Sgt. Major Jeff McLochlin who died in Afghanistan.
“It’s one of those unbelievable coincidences that this 9/11 would have been his (DeCrow’s) 33rd birthday,” said Keiser. “Justin’s mom will be there to take part in the ceremony and Mayor Senter. The Patriot Guard were at Justin’s funeral and that’s where we met them and why they’re happy to come back to be a part again.”

After the procession all are invited back to the Phi Delt Hall on Harrison Street in Plymouth to a hog roast with live music to raise money for the Patriot Guard. The event is $20. There will also be soft drinks and beverages provided.

“It’s a good way for us to show we support what they do, and celebrate our patriots,” said Keiser.
For more information on the Patriot Guard their website is www.indianapatriotguard.org.

Provided by our news partners at the Pilot