10/24/11  Final preparations for the upcoming debate between the two candidates for Mayor of Plymouth, Mark Senter and Jim Vinall, were made on Friday night. The debate will be held at the Plymouth Public Library on Wednesday, October 26 beginning at 6:00 p.m.

The moderator for the debate will be local resident Mike Litner. 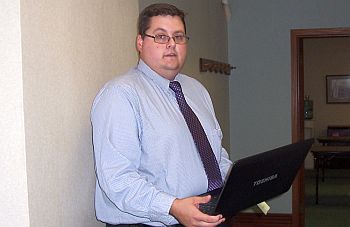 Representatives from both the Democratic and Republican Parties reviewed and selected perspective questions that will be used during the debate. Questions that had been solicited from the public or by the candidates themselves were narrowed down to the final ten by Democrat Jeff Houin and Republican Nelson Chipman. The candidates were given the option of submitting five questions each for consideration.

Once the final list of questions was determined, it was given to both Senter and Vinall.

According to Ryan Jessen, president of the Plymouth Area Chamber of Commerce Board, the candidates will be allowed five minutes each to make opening statements. A coin flip will be used to determine which candidate speaks first. As the incumbent, Senter will have the option to call the flip or defer the call to Vinall.

The responses (limited to two minutes) to the questions will be made on an alternating basis allowing each candidate to either be the first one to answer a particular question, or the last.

When the ten questions are completed, each candidate will then be given five minutes for closing statements.

WTCAam1050 Radio will air the debate for those unable to attend.