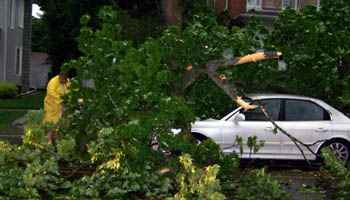 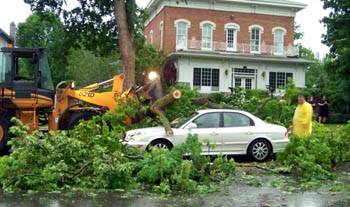 City police responded to North Michigan Street where a large limb of a tree fell on a car that was traveling in the south bound lane. The driver, Mychelle Crissinger and her 13 year old son Arron were not injured in the freak accident although having a huge branch like that come down right on the top of your car does cause one to be a bit scared and very upset.  Police did not do an accident report since the incident was an act of God.

Marshall County Sheriff Tom Chamberlin said, “We had a few trees down and three roads closed.  They were opened a few hours later.”  Roads closed were Olive at 5th Road, 4B Road, and Nutmeg near 11th. 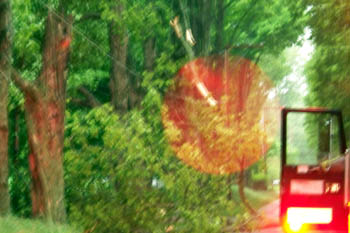 Plymouth Police chief Jim Cox said, “There were three calls do to the weather, although one was out in the County at Nutmeg and 11th road. There were no other weather related calls.” 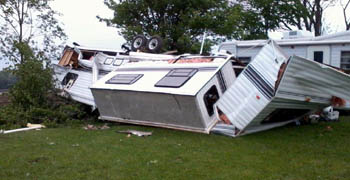 Campers at Pla-Mor Campground on US 6 east of Bremen said straight-line winds caused damage to a couple camping trailers. Sunday night’s storms hit the campground and totally destroyed three of the trailers while one, a 5th-wheel was flipped onto it’s top.  Five trailers has substancial damage, and ten had minor damage. 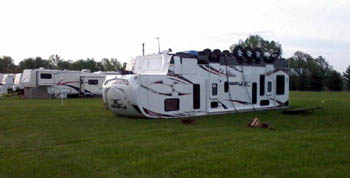 No injuries were reported at Pla-Mor thanks to the quick thinking of campground owners who went around the park notifying campers of the impending storm.

Firefighters from Argos, Bremen and Bourbon were called to their stations to be ready if needed.  In Culver the tornado sirens did blow.

Plymouth firefighters responded to 13224 Ironwood Road for a lightening strike.  Lightening struck a TV tower and came into the home.  The homeowners smelled smoke but couldn’t find a fire.  Fire Chief Andy Metsker said there was no fire but the home sustained damage to its wiring.

Plymouth firefighters were also dispatched to the tree on the car on North Michigan Street and to Nutmeg near Nutmeg Meadows where a large tree limb had fallen onto wires and into the roadway.  A car hit the tree branch but left the scene before emergency responders arrived on the scene.