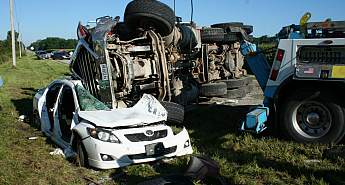 Tuesday morning, August 4th, at 7:26 AM, officers with the Marshall County Sheriff’s Department received a 911 call of a three vehicle accident on Lincoln Highway at the intersection of Beech Road.

Officers with the sheriff’s department, Bourbon Police Department and Indiana State Police responded to the area.  When emergency responders arrived on the scene they found a white 2010 Toyota passenger car on the south side of the road with a Red 2006 Mack dump truck lying on its passenger side, on top of the roof of the Toyota car.

The driver of the dump truck, 42 year old Michael Kats of Warsaw was out of the truck and only sustained a few minor scratches. 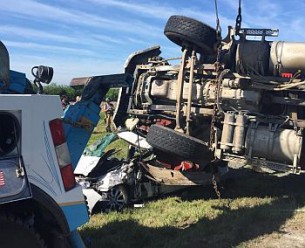 The driver of the Toyota car, 37 year old Kimberly Amor of Bourbon was trapped inside with the front end of the dump truck keeping her trapped in.

The third vehicle, a 2005 Chevrolet passenger car, driven by 25 year old Christopher Bradfield of Plymouth was sitting on the south side of the road, east of the two other vehicles.

County Police Officer Andrew Wozniak’s investigation determined that the dump truck was westbound on Lincoln Highway and Bradfield’s Chevrolet passenger car was northbound on Beech Road, at the stop sign.  The Chevrolet pulled out in front of the dump truck.  The truck attempted to avoid the collision but was unsuccessful.  Contact between the two caused Bradfield’s vehicle to spin and hit the back end against the dump truck.

The Chevrolet came to rest on the south side of the road, west of the intersection.  The Christopher Bradfield was thrown from the driver’s seat to the backseat. 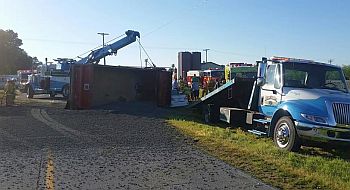 The dump truck began tipping over onto its passenger side and the eastbound Toyota driven by 37 year old Kimberly Amor was in the line of travel of the dump truck.  The dump truck fell on top of the driver side roof.  The female driver was trapped inside the vehicle until fire and medical personnel could safety get her out.