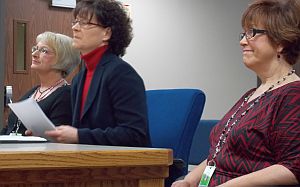 04/15/14 Marshall County Clerk, Julie Fox was given approval by the County Council to begin looking for replacement for two employees who will be retiring this year.

Monday morning county employees Avon Hampson and Linda Star appeared at the meeting with Fox.  Hampson has been an employee with Marshall County for 20 years and will be retiring on May 30th.  Star has been with the Clerk’s office for 18 years and will retire on September 30th.  Both noted changed in the PERF retirement plan as to the reason for their decisions to retire this year.

Fox said she would begin the replacement process but not have the new hires start until each deputy retires.

Several council members including Judy Stone told the employees they are true assets to the county and will be missed.

In other business the County Clerk pointed out a discrepancy between the 2014 Salary Ordinance and the 2014 budget.  The approved budget included a $2,000 per-diem for the County Clerk in the Voter Registration budget but the salary ordinance showed the per-diem at $1,800.

Councilwoman Judy Stone said she remembered suggesting reducing the per-diem during the budget hearings but did not realize the budget didn’t reflect her recommendation.