Mayor Senter Presents Keys to the City to Councilmen

01/02/12 Last week Mayor Mark Senter took a few minutes out of the City Council meeting to honor the three city council members who were finishing their terms.  He presented a Key to the City to each one. 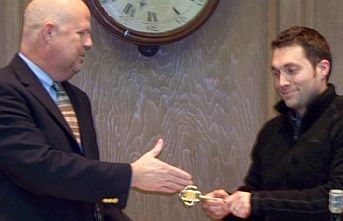 Councilman Mark Neidig completed his four year term.  Mayor Mark said, “Mark has had many questions off the record and many comments of opinions off the record the last four years.  But his dedication to city’s utilities and economic development has been a breath of fresh air.” 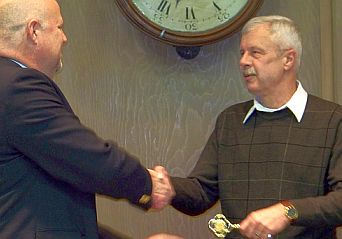 Councilman Don Gardner completed his second term with 8 years serving the city.  Mayor Mark said, “Don began his journey on January 1, 2004 serving the westside of Plymouth.  Don will be missed!”  He continued, “I got the impression he was a little unsure about this administration at first, but after a few months or so he has been nothing but supportive on what we have been trying to achieve here in Plymouth.  He has been a devoted council member for eight years that gives his opinions in a laidback style, but has always voted from his heart.” 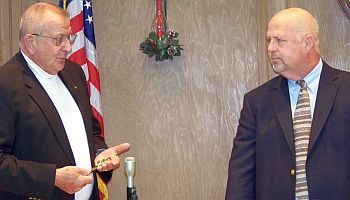 The final councilman honored was Chuck Ripley who just finished his third term or twelve years on the Council.    Mayor Senter said, “Chuck was sworn into office on January 1, 2000 under the administration of the late Jim Yeazel.  Chuck has also been a very dedicated public servant and has been my right hand man on the Solid Waste Board.”  He continued, “Chuck has his opinions and has never wavered in giving them during common council meetings.  We Truly appreciate his 12 years of energetic leadership and we extend him our best wishes for many years of happiness in the future.”