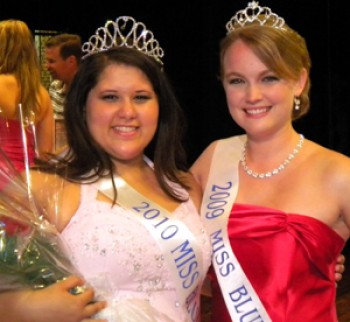 Araceli Lorraine Ortiz will be reining over this year’s Marshall County Blueberry Festival after being named the 2010 Miss Blueberry at a pageant held Saturday night.

Nineteen-year old “Celi”, as she is know by her family and friends, is a 2010 graduate of Plymouth High School and will be attending Indiana University of South Bend in the fall. She plans to pursue her interest in music performance.

Each of the twenty-one contestants in the pageant was challenged to create an outfit that reflected her extra-curricular activities or interests. The theme portion accounts for 30 percent of the total scoring by the judges. Comments on the reasons for the choices were read by Mike Burroughs, president of the Blueberry Festival board and emcee for the event.

Her love  of music and helping others in the community was evident by the fact that she lived up to her promise to sing the National Anthem for the opening for the Relay for Life event held in Plymouth only one hour before the Miss Blueberry Pageant started at Argos Jr.-Sr. high School.

For her win, Ortiz received a crown, sash, flowers, crystal bowl, blueberry necklace, and a $1,250.00 scholarship. She is the daughter of Patricia Ortiz and Elias Ortiz Baca.

Prior to the event, contestants met individually with the panel of judges for a personal interview, which counted as 40 percent of the total.

The remaining part of the scoring was the formal wear presentations and on-stage answering questions. Contestants were judged on poise and their ability to “think on their feet”.

The combined formal wear and questions/answers counted as the last 30 percent.

First-Runner-Up was Courtney Bahr, the 20-year-old daughter of Jackie and Tim Bahr. She will be a junior at Indiana University of South Bend in the fall, majoring in dental hygiene. Bahr was also voted “Miss Friendship” by the other contestants. For her wins, Bahr received two sashes, flowers; two crystal bowls a $750.00 scholarship and $100.00 cash.

Second-runner-up was Shelby Marie Dirrim. She is the 17-year-old daughter of Heather and Terry Dirrim. Dirrim plans to attend Indiana University-Purdue University Fort Wayne where she will be majoring in vocal performance and musical theatre. As the second runner-up, she received a sash, flowers, crystal bowl and a $500.00 scholarship.

Also placing in the top five were Casey Rose Hueni, daughter of Karen and Charlie Hueni and Jena VanDerWeele, daughter of Lori and Jack VanDerWeele. Hueni plans to pursue a degree in secondary education at Grace College and VanDerWeeele will attend Indiana University-Purdue University of Fort Wayne, majoring in dental hygiene.

According to Burroughs, the pageant is the official kick-off of the Marshall County Blueberry Festival.