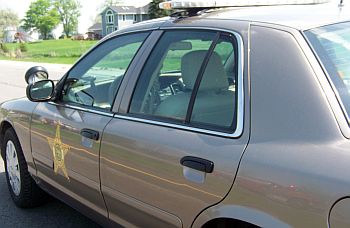 09/27/11   Two men were arrested last week after someone reported they were stealing County Highway property.

On Thursday September 22nd at approximately 4:42 p.m. the Marshall County Sheriff’s Department received a call indicating that someone in a green mini-van had allegedly taken a catch basin metal lid from the side of the roadway in the 14,000 block of 3rd Road.   Officer Les McFarland was in the area and was able to locate the green van and made the traffic stop.

During the investigation it was revealed that William D. Parks, 22 of North Liberty and Christopher A. Leed 32 of LaPaz had allegedly stolen the catch basin metal cover that belonged to the Marshall County Highway Department in attempt to sell the catch basin to a scrap yard for US currency.  Leed and Parks were arrested and transported to the Marshall County Jail where they both were booked in for Theft, a Class D Felony.  Their bonds were set at $1000.00 cash each.

Leed and Parks are scheduled to appear in Marshall County Superior Court #1 on October 18th at 8:30am.

Marshall County Sheriff’s Department urges the citizens of Marshall County to make sure that their personal belongings are secure and locked so that they do not become victims of a crime.