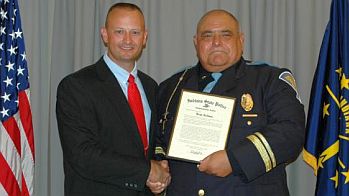 08/12/11 On Tuesday, August 2, the Indiana State Police Department held an awards and recognition ceremony in Indianapolis.  The ceremony honored and recognized individuals from around the state for their dedication to service, bravery and devotion to the department, and to the citizens of Indiana.  Those individuals honored were employees of the Indiana State Police Department and other public safety agencies.

Bremen Post Senior Trooper Brian Hoffman received a Commendation Award at the ceremony for actions he took in March, while off duty and with his family.

Hoffman was commended for taking immediate and decisive action that resulted in the capture of an armed fleeing suspect.  Hoffman currently lives in Elkhart County and has been a member of the Indiana State Police since 1999.