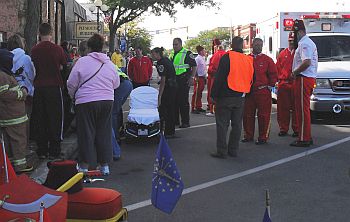 09/07/11 There was an accident with one of the entries during this year’s Blueberry Parade on Monday.  The Logansport Shriners’ Third Wheel Patrol Club, a precision go cart troop, was performing a “Figure 8” maneuver in front of the announcer’s stage in downtown Plymouth.  Two of the riders had a minor collision and while trying to avoid the collision, a third rider was injured as his go cart flipped to the side of the Michigan Street and into the crowd.

The parade was delayed for a short while the Plymouth EMT’s tended to the injured Shriner.  No spectators were injured.