Skillman Announces She Will Not Run for Governor in 2012 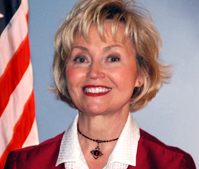 “With much disappointment, I am announcing today that I will not be a candidate for Governor in 2012.  My end of year physical exam revealed minor health issues.  Nothing will interfere with my devotion to my duties as Lt. Governor, and I plan to continue the same pace as always.  However, it is best to continue without the additional stress of a gubernatorial campaign.

“I owe a huge debt of gratitude to my family, office staff, campaign staff, and many friends and supporters throughout the state who offered great encouragement for my potential candidacy.

“I look forward to the next two years of service with enthusiasm, particularly the up-coming legislative session, as Governor Mitch and I work every day to move our state forward.”

Lt. Governor Skillman has served in elective office for 34 years. She began her career in 1976 as Lawrence County Recorder. After an eight-year term as recorder, she was elected Lawrence County Clerk. In that time, she also served as President of the Association of Indiana Counties. In 1992, she was elected to the Indiana State Senate, where she held unprecedented leadership roles for a woman. In 2004, she joined Mitch Daniels on the ballot and became Indiana’s first elected female lieutenant governor.