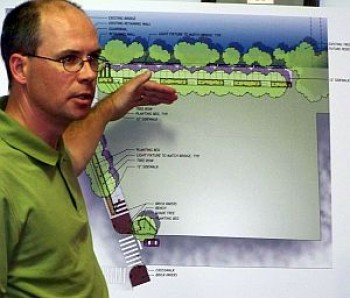 The Plymouth Redevelopment Commission recently received a update on the South Gateway Project by John Jackson of Ratio Architects.

Jackson shared information and drawings depicting where they are with a design for the Dimmitt property.  He said, “We have been concentrating our energy and the funding on the east side of South Michigan Street and north side of Lake Street.

The drawings provided show a 12 foot wide concrete path/sidewalk area that would accommodate the future Greenway Trail.  The sidewalk would d have a row of planted trees and would be at street level while a decorative retaining wall would raise about 13 feet from the river level, essentially the current location of the basement wall of the Dimmitt building.

The area along the river bank would be stabilized with rock and overtime green growth would cover the rocks.

The guard rail on top of the retaining wall would similar to the railing on the Yellow River Bridge in downtown.  The commission was asked to consider the possibility of lights on the railing like those on the new bridge.

Jackson said he wasn’t looking for a decision during the meeting, but wanted the members of the Commission to have an opportunity to review the concept drawings for some time.

Discussing the schedule, Jackson said, “We are in stage II, about where we need to be.  The field check was completed in early April.  We need to begin refining the details, explore the various systems and tighten up the costs.” 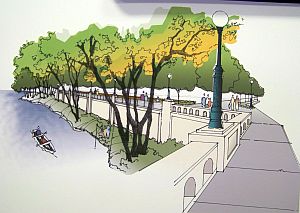 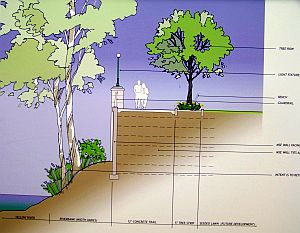