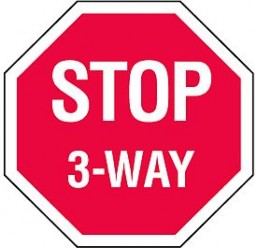 09/29/11 Pending the approval of the Plymouth Schools, a three-way stop will be erected on Discovery Lane, directly across from the east entrance to Menominee Elementary School.

Cory Collins, who resides on Discovery Lane almost directly across from the entrance, appeared before the Board of Public Works and Safety on Monday night.
Collins said there is an unmanned crossing there where children cross daily. He said, “Cars just zip around the corner off Elm Street.”

Collins said he initially thought of asking for speed bumps at the site, but changed his mind after learning that speed bumps are a bad idea for snowplowing. Board member Wayne Smith asked about signage in the area warning of a speed zone or school zone. It was noted that there are currently no signs posted.

Mike Delp, also board member, said stop signs could have a “calming affect” on motorists. There is one stop sign in place that is on the school property.
Plymouth Police Chief Cox spoke in favor of stop signs. He said kids have to have a safeway: “We need to train children to use the safe haven,” referring to marked crossings.

Mark Neidig, councilman, asked if anyone had contacted school personnel on the matter. He said it could affect the bus traffic at the corner. The board voted 4-0 to approve stop signs pending the agreement of the schools.