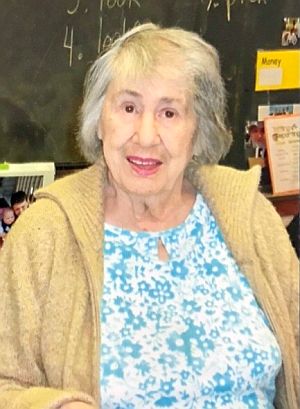 On January 19, 2023, Theresa Harman, age 96 of Plymouth, IN, went peacefully to be with the Lord Jesus. Theresa was a beautiful soul whose kindness and good sense of humor will be missed by many. She was preceded in death by her husband of 51 years, John Harman and is survived by four children: Mark (Coyne) Harman of Ridgeland, SC; Mary (John) Swinehart of Fort Wayne, IN; john (Becky) Harman of Columbia City, IN; Tim (Jennifer Harman of Bremen, IN; along with nine grandchildren and one great-grandchild.

Theresa was the 11th of 12 children. She was born in 1926 to Vincenzo and Maria Rose Augustine of South Bend, IN, who emigrated from Italy in 1912. Theresa was the last surviving member of her immediate Augustine clan. She attended South Bend St. Joseph Schools and was employed during WWII as a nurse’s aide.

After the war, Theresa continued to live and work in South Bend, including at her parent’s pizzeria on the eastside. In 1960, Theresa met John W. Harman of Warsaw whom she married in 1961 at St. Joseph’s Catholic Church in South Bend.

Theresa and John resided in Niles, Michigan until 1974, when they moved to Plymouth, IN. Theresa was a 25-year employee of the Balloon Wurks Restaurant, serving people as a waitress. She retired in 2000 at the age of 74 and lived another 22 years to the fullest. Theresa loved God, family, and friends, and they loved her. Theresa’s favorite past-times were playing bingo, watching game shows, and making people laugh. She was a member of St. Michael’s Catholic Church in Plymouth, IN, the Moose, the American Legion, and the VFW.

Theresa was preceded in death by her husband John in 2012 and will be buried alongside him at Oakhill Cemetery in Plymouth, IN.

Deaton-Clemens Van Gilder Funeral Home is honored to be providing services in celebrating the life of Theresa and wish to express our deepest condolences to the Harman family.

Friends are invited to sign the online guest book and share memories with the family at: www.deatonclemensfh.com.