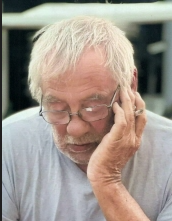 Paul was born on April 28, 1960 to Wilma and Herbert Paul Davis in South Bend, IN. He was a resident of the area most of his life. He worked for Indiana Wiping Cloth of Mishawaka, IN, then worked for Universal Bearings, Inc. of Bremen, IN until his retirement. He enjoyed short track racing at local asphalt tracks and watching NASCAR driver, Dale Earnhardt, Sr.

Paul is survived by his son, Shane (Angel) Davis of Plymouth, IN; his grandchildren: Alex Summers; Zach Summers; Zoey Summers; Elizabeth Sutterby; Emily Sutterby; Kynlie Davis; and Kyla Davis; his sister, Paula King of South Bend, IN; his son-in-law, Todd Summers of Bremen, IN; his close friend, Roni Denney of Plymouth, IN; along with numerous nieces and nephews.

Paul is preceded in death by his parents, Wilma and Herbert Davis; his daughter, Heather Summers; and his sister, Shirley.

Memorial donations may be made to the donor’s choice in Paul’s name.

Deaton-Clemens Van Gilder Funeral Home is honored to be providing services in celebrating the life of Paul and wish to express our deepest condolences to the Davis family.

Friends are invited to sign the online guest book and share memories with the family at: www.deatonclemensfh.com.