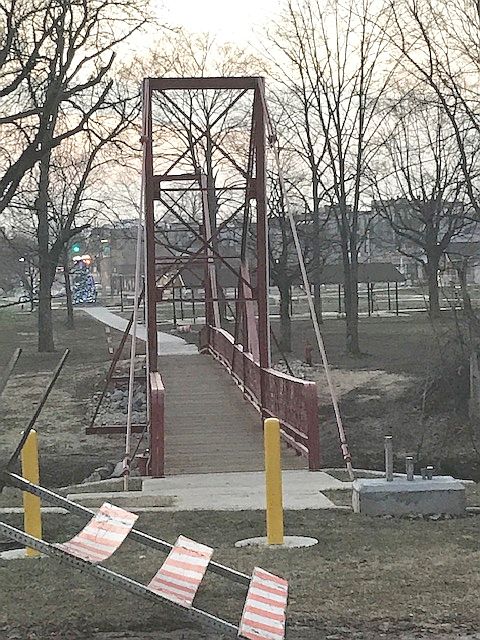 Plymouth Redevelopment Commission member Nancy Felde asked during their December meeting for an update on Phase II of River Park Square.  She had some concerns that the stone on the pavilion pillars isn’t up and there was no report during the November meeting.

Mayor Mark Senter said there are still some projects to complete but it’s really a Stellar project.

Senter did tell of an encounter he recently has at the historic footbridge.  He said this project was applied for in November of 2017 and during the February flood of 2018 was notified that the application was successful.  He said typically Transportation Enhancement Grants take several attempts to be awarded.  The mayor said he hasn’t even notified the clerk that the city has applied for the grant.

Well, a couple of weeks ago Mayor Mark walked out to the bridge to take a look at the project and there was an older gentleman there.  Mark thought he looked familiar, and they spoke.  The guy introduced himself to the Mayor as Jim Barker the guy who designed the renovation project.

The man hadn’t seen the completed work and had driven all the way from Bloomington to the footbridge.

Mayor Mark said they took a selfie at the bridge, and he called City Attorney Sean Surrisi out to the bridge site to introduce him.

Joking, Redevelopment Commission member Mike Miley asked if there was a place for “hoods” to smoke under it. He dated himself with that comment although many will remember the smoking that happened under that bridge.

The Redevelopment Commission also recognized Melissa Christiansen for her stint on the commission as a non-voting member representing the Plymouth Community School Corporation.  The School Board will appoint her replacement at their January 10th meeting.