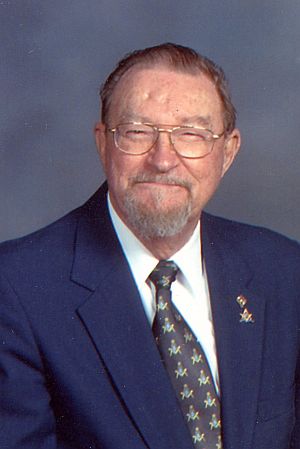 PLYMOUTH- Raymond C. DeVault, 95, passed away on Sunday, November 20, 2022 at Pilgrim Manor Nursing Home, Plymouth.
Born on June 1, 1927 in Chicago, Illinois he was the son of Raymond E. and Angela (Immekus) DeVault.
Raymond proudly served his country with the U.S. Army as a chef and was honorably discharged in 1948. After his service he attended Purdue University receiving his Bachelor’s in Science in Engineering. Through best friends on a blind date over dinner he met Esther Stumpf and they were married on December 30, 1950 in Plymouth. She preceded him in death on November 7, 1997.
He worked as a Mechanical Engineer at AC Electronics which eventually became General Motors retiring in 1986. During that time, he was proud of working on the Apollo Space Program. Raymond was larger than life, kind, opinionated but open minded. With his kindness he would donate the money for the playground set at Immanuel Lutheran Church. A compassionate man, that was always open to showing his love to others, especially his children and grandchildren.
Raymond enjoyed playing cribbage, bowling, paper cutting, working on water color paintings and was an avid reader of science fiction books. He enjoyed singing in the choir and reading scripture at church.
He was a member of the Kilwinning Lodge #149 F&AM, Nappanee Chapter Royal Arch Masons, Phi Delta Kappa in Plymouth, Scottish Rite Valley of South Bend, South Bend Commandery Elf Khurafah Shrine as a member of the Clown Unit, Michigan Registered Engineers, Flint Chapter Michigan Society of Professional Engineers, Past President of the Eastern Michigan Chapter American Society of Heating, Refrigeration and Air-Conditioning.
He is survived by his daugthers: Donna (Dennis) Wenzel of Plymouth; Linda DeVault of Livonia, MI; Grandchildren: Bruce (Beth) Brown of Livonia, MI; Barbara Brown Livonia, MI; Eric (Dawn) Wenzel of Pensacola, FL; great-grandchildren: Jessica Brown, Owen Brown, Bradley Nelson, Sara Nelson, Joshua Wenzel, Seth Wenzel; sisters: Pauline Pierson and Joan Branden; sister-in-law Evelyn DeVault; as well as numerous nieces and nephews.
Raymond is preceded in death by his parents, wife Esther, sister Florence, brothers: Robert and James.
A celebration of life will be held at a later date in the spring.
Memorial contributions can be made to the Immanuel Lutheran Church, 6835 Union Rd. Plymouth, IN 46563.
Condolences may be sent to the family through the website:  www.johnson-danielson.com<http://www.johnson-danielson.com>