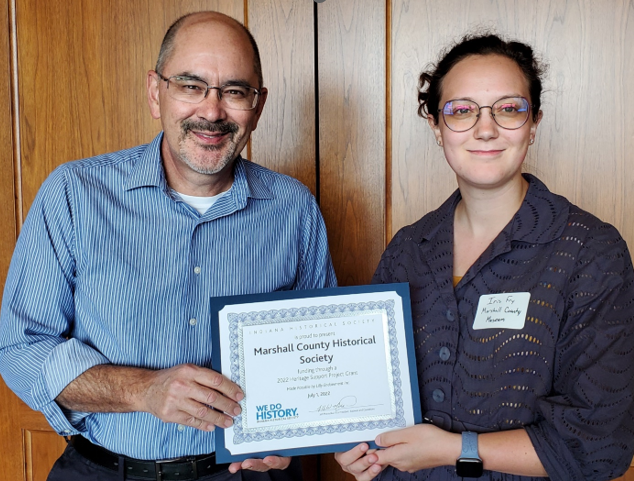 Marshall County Museum Archives Director Iris Fry attended the Indiana Historical Society Awards ceremony in Indianapolis on September 23rd. Iris formally accepted the grant award from Jeff Mitsuoko, Vice President of Business and Operations of the Indiana Historical Society. The grant and matching funds will be used to update and expand the Transportation Room, one of the Museum’s most popular exhibits.

The grant will enlarge the current Historic Crossroads exhibit, adding a Native American story station created in partnership with Oklahoma’s Citizen Potawatomi Cultural Heritage Center. The new exhibit will feature a life-size wigwam and a Potawatomi-language interactive. It will also tell the story of the changing natural landscape and how early settlements grew along with the roads.

A third new story station will provide the history of local migrant families written in conjunction with some of their descendants. The expanded exhibit will explain how County agriculture evolved and provide details on the growth of transportation- and tourist-based business and industry. A fourth new station will talk about the history of aviation in the County.

Originally created in 2011, the Historic Crossroads exhibit tells the story of transportation in Marshall County and why it is foundational to our history. Beginning in the 1830s, the Michigan Road followed an Indian trail and cut through the heart of our County. It was joined about 75 years later by four historic highways – Lincoln, the Grand Army of the Republic, the Yellowstone Trail, and the Dixie Highway. Marshall County is the only place in the entire country where all five roads cross.