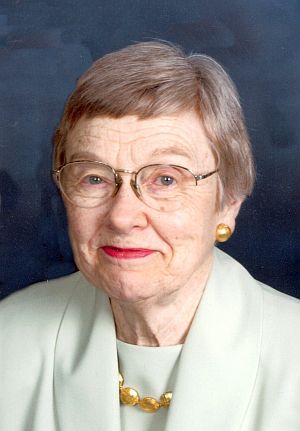 Betty Louise Pinney Laramore died at age 93 on September 29, 2022, at Otterbein Franklin Senior Living Community, where she had resided for nine years.
She was born April 19, 1929, in South Bend to Carroll L. and Nettie Mitzner Pinney. She graduated from Riley High School and attended Medill School of Journalism at Northwestern University. While in high school, and for a year after graduation, she worked in the editorial department of the South Bend Tribune.
On June 25, 1950, in South Bend she married William F. Laramore and moved into the house on Ferndale Street in Plymouth the couple had built before they were married and where she lived for 63 years. She spent more than 30 years working at Bosworth’s, the retail store founded in 1891 by her husband’s grandfather, retiring as merchandise manager in 1983. Bosworth’s was an important business in Marshall County for nine decades, and Bill and Betty Lou were devoted to customer service and caring for their employees. Betty Lou personally ensured that dozens of Marshall County brides had perfect weddings, and she supervised the fashion review at the county 4-H fair for decades. Bosworth’s pioneered providing medical insurance to its employees.
Survivors include her son Jon (Janet McCabe), son-in-law Randolph Johns, grandchildren Alice Laramore (Adam Paltrineri) of Boston, MA, Dan Sheehan (Bri Booram) and Peter Laramore, both of Indianapolis, great-grandchildren Remy Laramore and Jack Paltrineri, five nieces and three nephews. She was preceded in death by her husband, daughter Ann Laramore Johns, brothers Wilbur and Donald Pinney, sister Leah Collins Heiderich, and in-laws George and Jean Schricker. She loved hosting family meals featuring produce from her garden.
Betty Lou was devoted to helping people and making Plymouth a better community. She was a founding director and first secretary of the Marshall County Community Foundation, actively involved in raising more than three million dollars to match the initial Lilly Foundation grant. She co-chaired the drive to raise a million dollars for the new Holy Cross Parkview Hospital (now St. Joseph Health System Plymouth Medical Center). She was an active member of First United Methodist Church and its choir and co-chaired the 1998 drive that raised more than $600,000 to renovate the sanctuary building.
As a community leader, at various times she served as president of the Board of Trustees of the Plymouth Community School Corp., Indiana Public Television Society, Ancilla College Board of Directors, PIDCO, Holy Cross Parkview Hospital Auxiliary, and the local United Way and Tri Kappa active and associate chapters, often the first woman board president. She was a director of United Telephone Company of Indiana (now CenturyLink), Holy Cross Parkview Hospital, St Joseph’s Care Foundation, Plymouth Community Improvement Commission, and the Indiana Medical and Nursing Distribution Loan Fund.
For ten years she was a member of the board of Michiana Public Broadcasting Corp., which manages WNIT television, and in 1992 was named Outstanding Auction Volunteer. In 2007 she was honored by the WNIT board of directors for more than 20 years of “exceptional service to the station.” She produced the Politically Speaking program on WNIT for several years. The National Friends of Public Broadcasting honored her with the Elaine Peterson Special Achievement Award in 1995.
With her husband, she received the Plymouth Jaycees Distinguished Citizen Award in 1972, the Ancilla College Distinguished Service Award in 1983, the Community Spirit Award given by then-St. Joseph Regional Medical Center Plymouth in 2003; and the Plymouth Area Chamber of Commerce Distinguished Citizen Award in 2005. She was honored by Gov. Joseph E. Kernan as a Sagamore of the Wabash in 2004.
Visitation will be held on Thursday, October 6, 2022 from 12-2 pm at the Johnson-Danielson Funeral Home, 1100 N. Michigan Street, Plymouth. Funeral services will immediately follow with Pastor Lauren Hall officiating.
Burial will be in the New Oak Hill Cemetery, Plymouth.
In lieu of flowers, memorial gifts may be made to First United Methodist Church, c/o Marshall County Community Foundation, P.O. Box 716, Plymouth, IN 46563 or United Way of Marshall County, P.O. Box 392, Plymouth, IN 46563.
Condolences may be sent to the family through the website:  www.johnson-danielson.com<http://www.johnson-danielson.com>