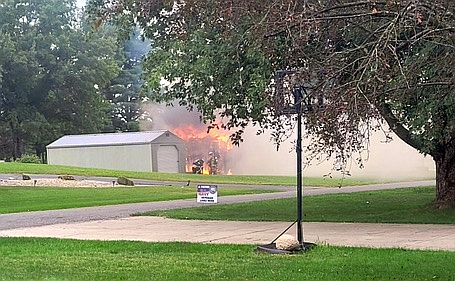 Plymouth Fire Inspector Chuy Garcia said when firefighters arrived on the scene heavy black smoke and flames were through the roof on the north side of the home.  The fire started in the garage and while there was no fire damage to the home, the residence did suffer from smoke and water damage.

Plymouth Firefighters received mutual aid from the LaPaz Fire Department.  They were on the scene for less than 2 hours.

No injuries were reported, and Garcia said that a couple of golfers on the Woodbury Golf Course saw the fire and notified the homeowners by banging on their door.

According to the Marshall County GIS the home is owned by Mark and Maria Lemert.