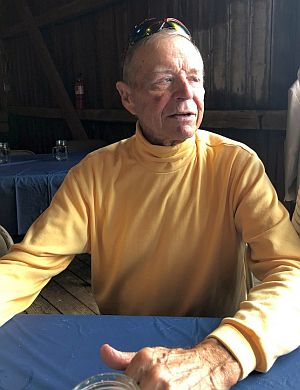 He was born in Winamac Indiana to Frank and Marie (Dillenburg) Schmidt and was one of ten children. He grew up in Monterey, Indiana where he attended Culver High School and later graduated from Purdue University where he met his future wife Patricia ‘Pat’ Meehan. They would wed in Carmel, Indiana on January 30, 1965.

Harold and Pat moved to Plymouth, Indiana and had three children. He worked for Standard Oil (Amoco/BP Oil) after graduating from Purdue in their agricultural division before moving into a jobber position where he interacted with station owners in the northern third of Indiana and lower portions of Michigan up to his retirement.

Harold was passionate about his golf game. He volunteered his time in the community with the Boy Scouts of America, taking people to medical appointments, and in schools in Plymouth and Monterey. He was a longtime little league coach at all levels and is best remembered for his exuberant attitude and flamboyant hats. He also spent a significant amount of time behind the plate as an umpire for women’s softball. He spent a great deal of time with his grandchildren. Harold was a member of St.  Michael Catholic Church and the Plymouth Knights of Columbus.

Harold was preceded in death by his wife Patricia in 2014, his parents, his brothers: Paul, John, Bill, Jim and Rick Schmidt and his in-laws.

In lieu of flowers, memorial contributions can be made to St. Michael Church, 612 N. Walnut Street, Plymouth or Humane Society of Marshall Co, PO Box 22, Plymouth, IN 46563.