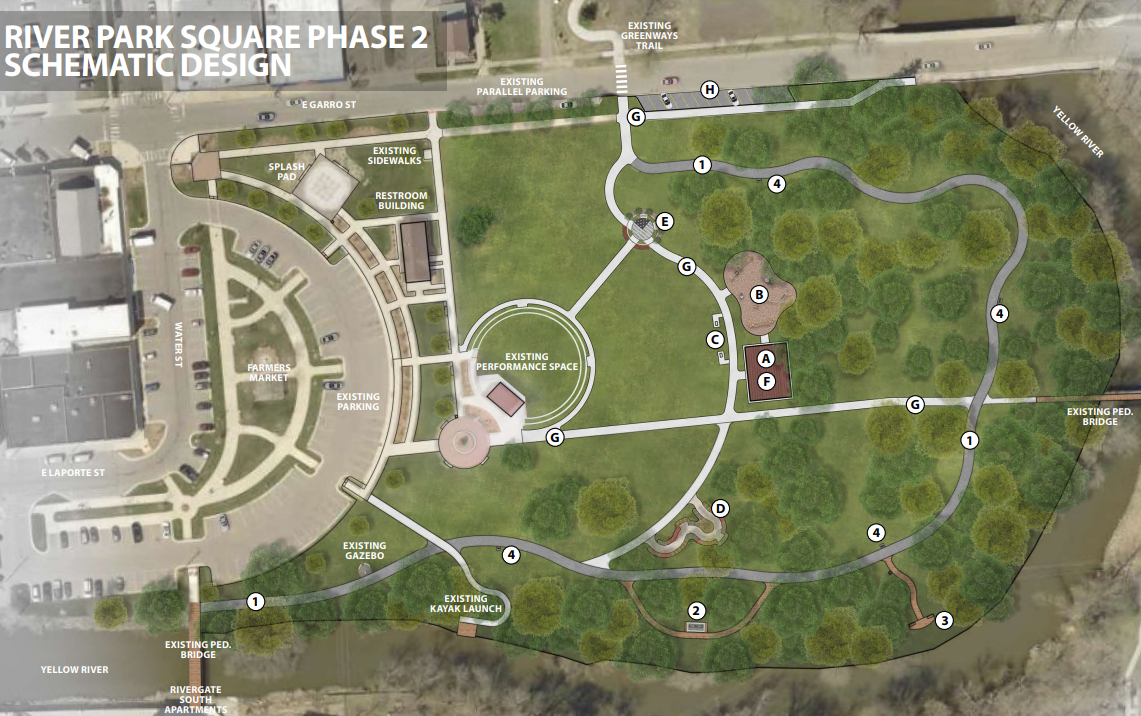 Phase II includes a Veterans Memorial Plaza (E) with flags representing all branches of the military. The circular concrete area will be along a newly installed sidewalk (G) and sits closer to Garro Street. Hite said there is a small playground area (B) that will include some natural-looking play structures and will sit near for former intersection of River and LaPorte Streets toward the walking bridge. The superintendent said the equipment is on-site and should be installed in the next couple of weeks.

Also included in phase II is a 60 by 40 pavilion (A) that will have electricity and could be rented for family gatherings, graduations, and weddings.  The structure is on back order and should arrive by the end of September.  This is also the location where the park had planned to place the synthetic ice-skating rink under to keep the snow off the surface.  Hite said the ice-skating rink had to be pulled from the project due to cost, but the park does still have it in the 5-year plan.

The construction in River Park Square included a permanent corn hole game (C), you’ll just need to bring your own bags to play. There are also new sidewalks (light color in photo) making the park easily accessible to everyone from walking to riding a skateboard or pushing a stroller and additional angle parking (H) on Garro Street.

The project should be completed by mid-October dependent material.

Superintendent Hite said some survey work for phase III of the Greenway Trail is currently happening in River Park Square too.  This is an INDOT project.  This project will connect the Greenway Trail from Garro Street through the park, along the river to the pedestrian bridge on the South Gateway by an asphalt trail.  This project is expected to be completed next year.  (On the photo the trail is the darker trail.)