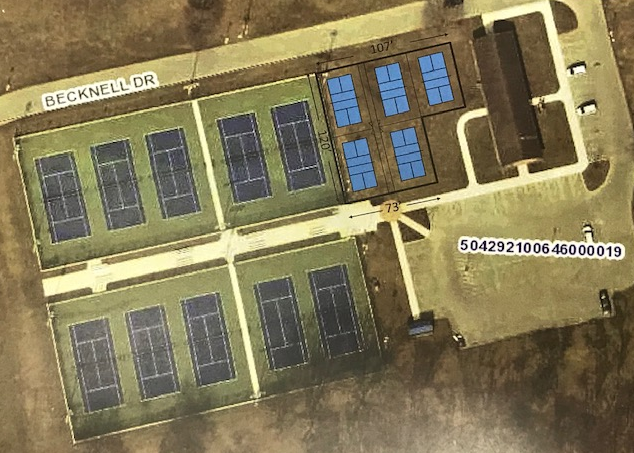 Miller told the City Council pickleball is the fastest growing sport in the USA and while many players are over age 50, pickleball encompasses all ages and skill levels.  He also said there are more than 50 local citizens currently playing regularly and many travel to other communities which have dedicated courts such as Bremen, Knox, Rochester, Winamac, Warsaw, and South Bend.

The pickleball organization has proposed a 4 to 6 courts project in Centennial Park between the Hunter Tennis Complex and the Freyman Shelter.   Park Superintendent Mike Hite and Mike Reese from The Troyer Group have put a cost estimate of $200,000 together for the four-court project.  Hite also confirmed that the Plymouth Park Board is supportive of the project and just this month approved the location the pickle ballers suggested.

Dave Miller explained that the location is already level because it had initially been planned to be the youth tennis court location.  He said they would have access to the parking lot, restrooms, and shelter and could use some of the existing lighting and fencing for their project.

The local pickleball group is already working on funding for the project.  Miller said the sources for funding targeted by the group are $60,000 from the Plymouth Park Department, $40,000 from other local government sources, $50,000 from individual and corporate donors, and $50,000 from various grants.  Dave said,  “As we proceed we may come to you because for the grants we have to come through an entity.” said Miller. He also told the City Council that from their launch carry-in dinner they received $13,000 in pledges from local players for the fundraising campaign.

For more information on the local pickleball project contact Dave Miller at 574-780-2261 or by email at millerd54@gmail.com.