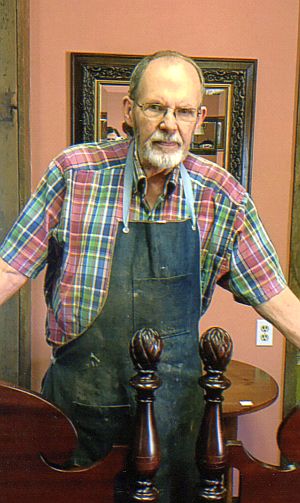 James R. Manuwal, 78, of Argos passed away on Thursday, August 4, 2022 at home surrounded by his wife and four children.
Jim was born on November 23, 1943 in Plymouth, Indiana to Kenneth and Marcella (Moorehouse) Manuwal. James was a 1962 graduate of Plymouth High School. He then served 6 years with the National Guard. On May 1, 1966 he married Sandra Phelps.
Jim along with his wife Sandy owned and operated Century Antiques in Plymouth for 53 years. Jim was eccentric and a master at his trade. His strong work ethic and attention to detail showed in each piece he restored. Jim always said that the customers were the best part of owning the business. He appreciated his loyal customers, serving some families for multiple generations. Attention to detail also showed in the way he took care of his farmland; no piece of trash or rock went unnoticed.
He was also an avid euchre player and enjoyed listening to music and dancing. Jim was proud of his grandchildren as well and enjoyed following their many activities. Jim was a man of faith and strong character and was a longtime supporter of Right to Life.
Along with his wife Sandy, Jim is survived by his four children: Sarah (Kip) Emmonds of Tippecanoe, IN; Abigail (Mark) McIntire of Argos; Adam Manuwal of Culver; Seth Manuwal of Tippecanoe; 8 granchildren and 5 great-grandchildren: Sam (Stefany) Edmonds and children Lucas, Lila, and Madelyn of Noblesville, IN; Zachary (Skyra) Edmonds and children Abigail and Gracie of Argos; Matt Edmonds and Elizabeth Edmonds of Tippecanoe; Jedediah McIntire of Culver; Jack McIntire, Joel McIntire, and Juliana McIntire of Argos; brother Robert (Becky) Manuwal of Plymouth; Kathy Manuwal of Westfield, IN;  as well as several nieces and nephews.
James is preceded in death by his parents Kenneth and Marcella Manuwal, brother-in-law Bill Herschberger and sister-in-law Vicki Larson.
Visitation will be held on Thursday, August 11, 2022 from 4-7 pm at Johnson-Danielson Funeral Home, 1100 N. Michigan Street, Plymouth.
Funeral services will be held on Friday, August 12, 2022 at 11 am at the funeral home with Reverend Chuck Krieg officiating.
A private burial will take place in the Bethel Cemetery, Argos.
Memorial contributions can be made to Right to Life North Central Indiana Education fund, PO Box 1162 Warsaw, IN 46581, Kindred Hospice, 1476 W 18th St. Rochester, IN 46975 or to Marshall County Council on Aging, 1305 W Harrison St, Plymouth, IN 46563.
Condolences may be sent to the family through the website:  www.johnson-danielson.com<http://www.johnson-danielson.com>