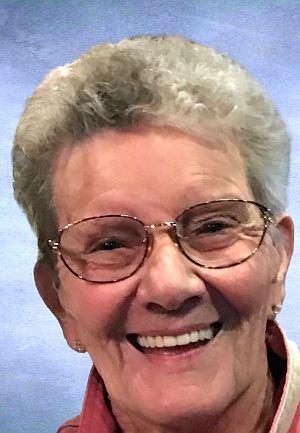 Joanne M. Cook passed away peacefully on Friday, July 22, 2022 at home surrounded by her family.
Born on June 17, 1934 in Chicago, Illinois she was the daughter of Hugo and Marie (Merket) Anderson. She attended Knox High School graduating with the class of 1952.
On January 13, 1951 she married Eugene Cook in Valparaiso, IN. They would both own and operate Cook’s Jewelry Store in Knox from 1951 to 1994 before retiring.
Joanne was known as someone that would care beyond limits, caring more for others than her own well-being. She would never forget a birthday or anniversary; a card would arrive in the mailbox as a sign of her kindness. She was continually energetic and busy, and as known as the anchor of the family that would hold everything together.
For years her and Eugene loved to bike, biking every morning about 15 miles before they would head into the Jewelry store. She had fond memories of traveling and going on nice peaceful walks looking for bittersweet.
Joanne was a member of Redeemer Lutheran Church in Knox, Bass Lake Country Club and Plymouth Country Club.
She is survived by her husband Eugene of Plymouth; daughters: Laura (John) Gough of Plymouth; Gloria (Bob) Lorenz of Knox; Nancy (Will) King of Plymouth; brother Richard (Mary Ann) Anderson of Evanston, WY; grandchildren: John B. (Jamie) Gough II of Knox; Emma and Grace Lorenz of TN; as well as several nieces and nephews.
Joann is preceded in death by her parents and her brothers Hugo and Chuck Anderson.
Per the wishes of the family no services will be held.
Condolences may be sent to the family through the website: www.johnson-danielson.com<http://www.johnson-danielson.com>