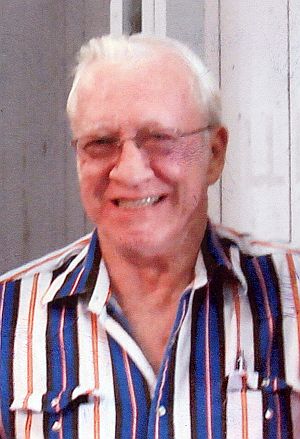 He joined the U.S. Army and served during the Korean War and was Honorably Discharged.

Earl drove truck for Alexander Chemical in Kingsbury, IN and later retired from the company. He would then enjoy being a Wal-Mart greeter in Plymouth for 12 years until his official retirement at the age of 82. He was a member of the Plymouth-Kilwinning Lodge #149 for over 50 years, the American Legion Post 27, and the VFW County Post 1162.

He was a people person, loved being in large crowds and never stopped talking. He enjoyed gambling, Elvis Presley, caring for all animals and plants, and watching old westerns. Earl loved being around his family and he loved his Lord and will be dearly missed.

He was preceded in death by his parents; his wife; children Sherry Quecke and Dennis Scott; and brother, Johnny Scott.

Visitation will be held on Saturday, July 2, 2022, from 11-1:30 EST p.m. at Johnson-Danielson Funeral Home, 1100 N. Michigan Street, Plymouth. A Masonic Ritual will begin at 1:30 and funeral services will immediately follow with Pastor Pat Allen officiating.